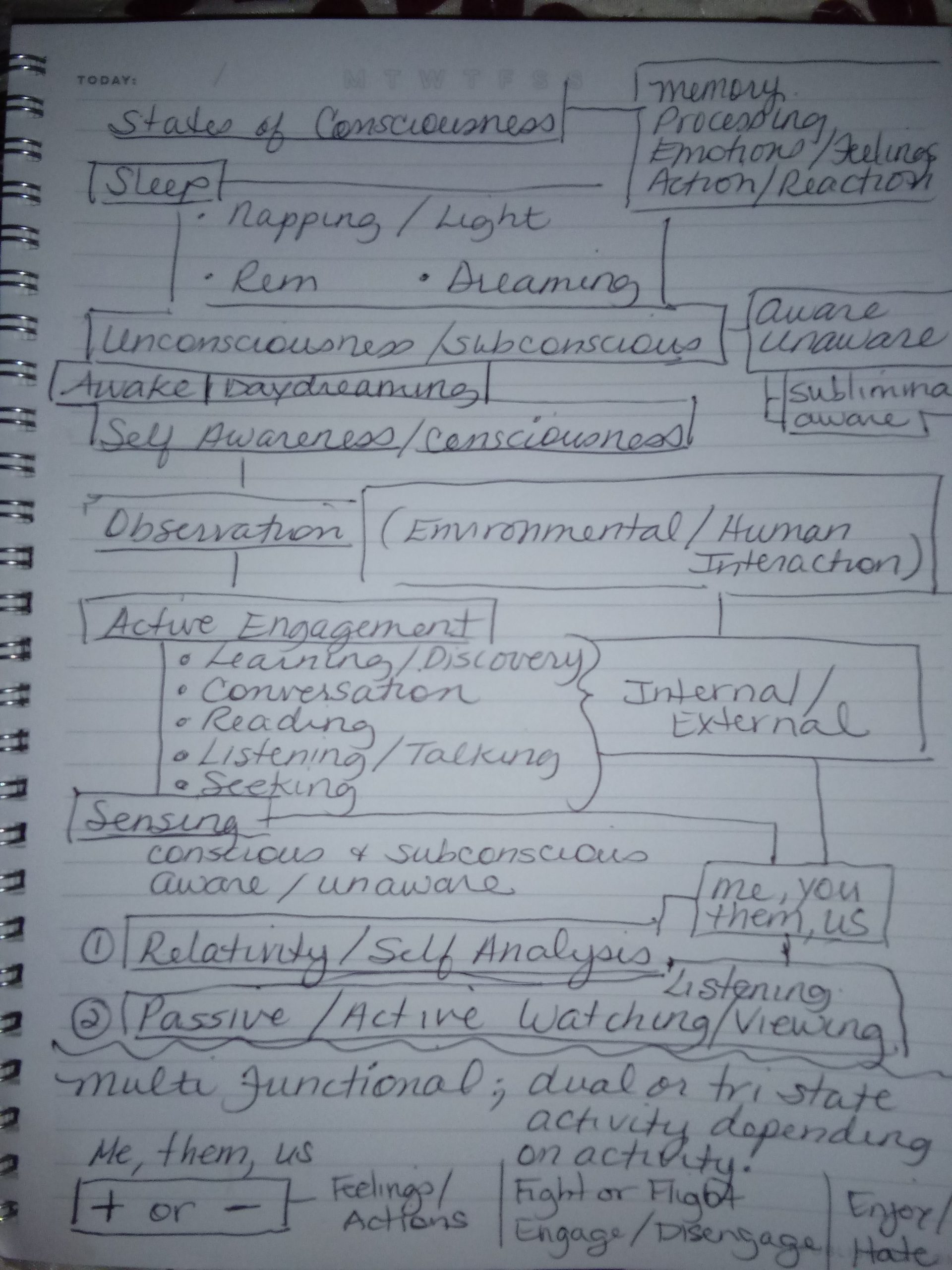 Human Consciousness is a vast and complicated topic simply because it deals with various states of mind.  We’re asked to understand consciousness and its associated behaviors, reviewing Freud’s theories, but I cannot simply review this from a behaviorist perspective without first explaining how I understand and work with my own conscious and how I understand my own state of consciousness to change and how it affects mood or behaviors.  I choose to review what is presented and compare and contrast it to how I understand my own states of consciousness vs. unconsciousness and reactions to various inputs such as television, radio, human and environmental interaction or observation.  Measurements of time, depth, feelings, and reactions are required to fully understand how the conscious shifts from one state to another, as well as all of the activities that occur within each stage in order to fully understand the Human Conscious, Subconscious, Unconscious, Aware, and Unaware states of Mind.

Human conscious awareness includes self consciousness or self awareness, internal reflection, review, and active or passive engagement with others or things within an environment.  Consciousness can be observed in periods of awakeness or during sleep, as we have times we have self awareness during sleep and know we’re asleep.  Consciousness is nearly equal to knowingness.  If one is conscious of something, they are aware of it, therefore know it; one cannot be aware of something and not know it.  Alternatively, one can be in an awake state, but unaware of themselves, their environment, or even their actions; the brain activity is found in the autonomic system and includes automatic functions, such as reflexes, twitches, or other mind body movements.  Our research has found automatic movements and automatic thoughts without consciousness, wherein a subject may be bouncing their leg or tapping their fingers and not be consciously aware; just as one can be in a sleep state and found walking or talking.

Dreaming is another state of consciousness with various types of dreaming, such as daydreaming, interactive dreaming, or dreaming with a semi-conscious state where one knows they are asleep, yet are somewhat awake and attempt to control the dream.

Self Awareness/Self Consciousness is another state of the conscious mind where an individual has a higher sense of their activity; perhaps more focused to reach a greater level of precision of a movement, thought, or act, which can be associated with positive or negative feelings of consciousness which affects their self image or view of oneself.

Active Engagement is another form of conscious where the human in engaged in conversation or an activity with another human or object, which requires access to the memory, processing center, and movement centers to engage in body language, which can be conscious, subconscious, aware or unaware.  One can easily understand this by saying CA or CU; SA or SU, where the two can operate together or independently of one another, but one cannot be subconsciously aware, although even that can be refuted if you can understand that a person can receive a subliminal message and store it for later, in an unaware state, because some other process is operating in the subconscious to present to the conscious later, when the information is ready for presentation.

Another state of consciousness is Sensing where emotions and feelings are engaged, which can occur simultaneously during both awake and asleep states, and conscious and subconscious states, such as crying in a dream, or crying without knowing why or feeling a sense of fear without visible stimuli.  Sensing and perceiving are considered active states of consciousness which are categorized as Reactions.

Relativity is another state of consciousness that occurs in moments through time.  I haven’t mentioned how time plays a factor in these states of mind and is not always the same for each state because it depends on history of the exposure to stimuli, but time is always a factor in altering states of mind from conscious to unconscious, subconscious to conscious, asleep to awake, and daydreaming or periods of focus or drifting.  These states can further be categorized into Passive and Active States of Mind.  Relativity in Einstein’s Law’s only talk about relativity in motion of objects from one’s perspective to another, but it can also be applied to one being able to empathize or access their own memory to find a similar or like experience, thought or feeling.  This is often found during Active States of Consciousness when engaging in conversation when sharing thoughts, feelings, experiences or while actively viewing entertainment like Television, Movies, or Music.  Relativity invokes soul-connected sometimes positive or negative feelings.

These states of mind are multi-functional; potentially dual or tri-states depending upon the activity or stimuli.  The states of mind can be calculated using positive or negative calculations through brain stimulation, center activation, and measurement, but are primarily displayed through positive or negative emotional or physical action or reaction.

Another important state of mind is Observation (Internal and External), where the mind is engaged in an input state of receiving stimuli; simply observing and discovering or rediscovery new or unfamiliar data, circumstances, or surroundings.

States of mind can also vary in the use of the visual cortex where inputs vary in media or environment as well as memory activation of happy and traumatic events, which are often the culprits for the change in the state of mind or emotion.

How a human’s state of mind or consciousness can be altered is not only done by psychoactive drugs, but through memory activation, manipulation, and potentially the moon phases or changes to one’s sense of safety, well being and comforts. 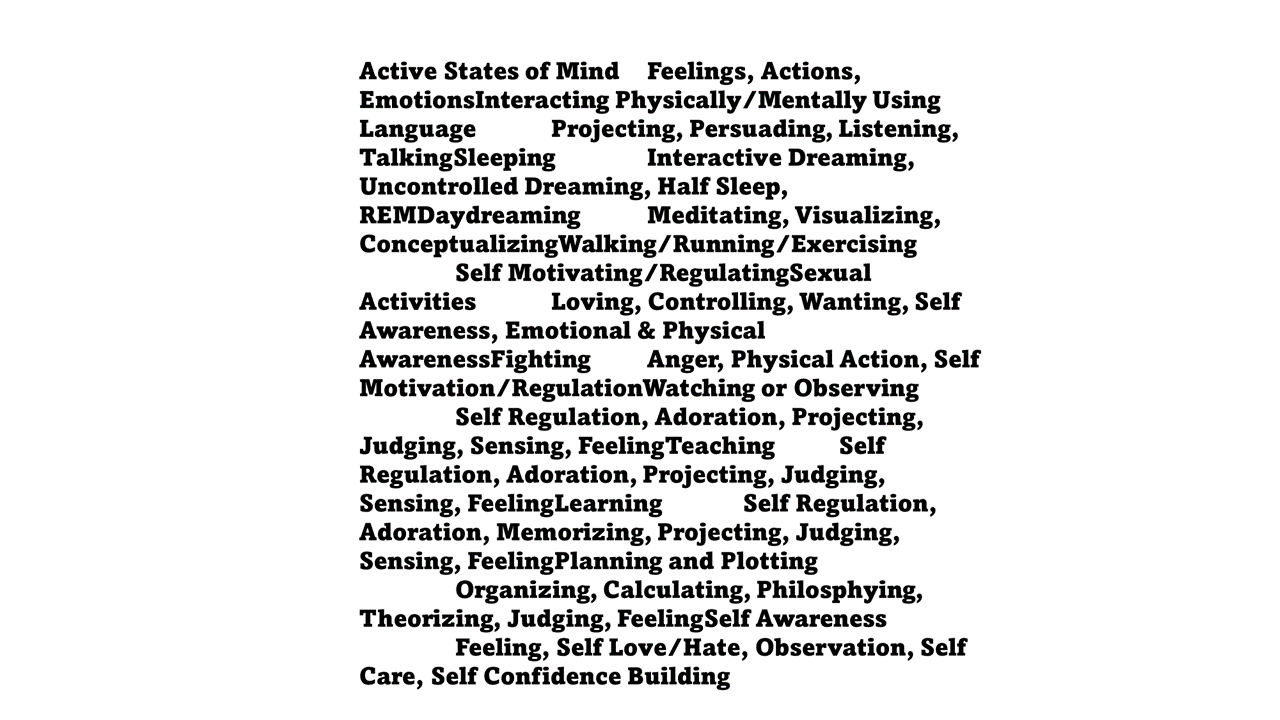