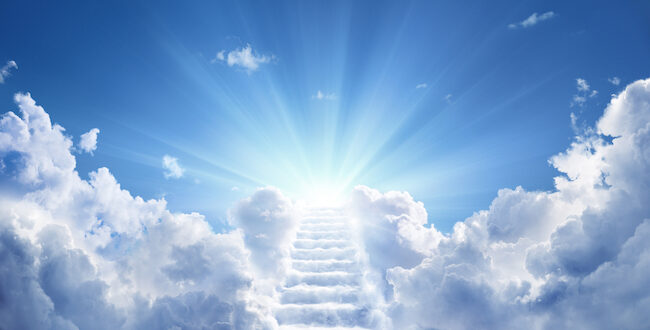 This is not a dinner table topic, although it is a question that every human has pondered, at least we hope.  Where do we go when we die and are we held accountable for every action on earth and are we judged as we live or does it all happen at the end of our life with a ticket to heaven or hell?  Many are taught religion, to believe in God, the Father, the Son, and the Holy Spirit, or Mother Mary and Jesus’ disciples or Allah, or Jehovah, but many religions are the same and have a book to read or follow.  Not many actually read it and not many actually live it; it’s not easy to read and decode or understand!  The premise of religion is simple, believe, accept Jesus as your savior and follow the Ten Commandments, live a decent life, and treat each other as you want to be treated.  When people choose a life of religion, some choose to study the word because they’ve chosen it as an interest; others just go to church for the music, the preaching or the fellowship.  Most every citizen was raised to believe in some form of a Savior called God and some just don’t believe at all; they believe nothing exists beyond this realm.  Others spend their entire lives seeking it out, learning God’s mysteries and some don’t even question how the earth got here, what its plans for the future are, who is guiding it, ourselves, our brethren, and our souls.  Some are just pissed off and want to leave the planet entirely and are making plans to do so since God never told us if he created other planets or how he did it.

The question is:  is there an afterlife?  As a child, I used to say absolutely, without even a second thought; and now after experiencing life a bit, I wish there wasn’t for some.  I went to church regularly as a little girl, was taught to read the Bible at an early age, and worship God.  I never really questioned much of what I was told, but eventually, as most kids do, reached a point where I was ready to leave it behind for some trouble.  After doing so, I was informed I had a late Uncle who served in the US Navy.  I’d always secretly hoped for a rich Uncle to save me.  His photograph was never visible to me during my younger years; oddly enough.   It was either because I was too young to be told of death or fathom it; most likely not.  It was mysterious, just as my following in his footsteps unbeknownst to me.  As soon as I was made aware of his former existence, I began talking to him at night, giving him my daily woes and troubles and I experienced his work first hand; he actually answered my prayers.

I recall one time preparing for an intimate encounter with my high school sweetheart and someone ran up the stairs of his house, moved some picture frames, and was gone within a minute – that someone was heard but invisible, unseen.  Internal thoughts were that the relationship was forbidden, shameful and illegal.  After a few checks and phone calls, we confirmed no one else was in the house.  I can’t be certain it was the man himself, because I’ve had a few other encounters with Ghosts, but I’d like to believe he was the one who slapped the crap out of my boyfriend’s mother in her sleep for looking down upon me as a young girl.  Looking back, I realize he’s taken very good care of me and led me down a solid path with a level of maturity beyond my years and I don’t think he works single-handedly.

There were also several years that I stopped speaking to him directly, perhaps because we were already one and it wasn’t necessary or because of some other crazy religious reason out of our control, but he still talks to me today.  I don’t get to see the perfection of his black and white photograph, which is why I am on a natural quest for answers as to what makes up one’s memory and mind.  If there is an afterlife and he has been my guide or soul mate, then its no wonder I cannot marry, am always drawn to the ocean, and well, he’s got a lot of answering to do.  If he is still alive and kicking, I wonder where my tour guide will take me next.  There was a time when I’d meditate and I’d experience some of the coolest sights and senses, but he never really revealed his identity.  It wasn’t until about a year ago that he reminded me of the smell of the photo album where I became amazed by his Navy days or the smell of my perfume at that time.

For me, yes there is an afterlife in him; but my own afterlife, is questionable.  Sometimes I wonder if I trip my own mind into believing in him when he may have ran off to some other planet and found beauty elsewhere, but its simply because he shouldn’t be forced to suffer with me here on earth, even though he’s tried to kill me several times; and honestly, I’ve loved every experience because he seems to be able to make them very memorable occasions and boastful stories of Angels in the Outfield.

Personally, my religion is skewed because I worked for these guys named Mr. High, Chris, and then got sued by a lady named Mary and a man named Paul.  My “Father” was in my life at the time and life was centered around my Son.  In my religious hopes, I tried to believe they were my saviors, but after losing my son to a bad lying kniving lawyer named Mary, I could no longer believe.  This guy named High (the Most Highest I’d ever worked for in Military) seemed to be my Most High God, but failed me miserably.  The guy Paul, I’d hoped could be the Apostle, but wasn’t even remotely close.  I guess since his middle name was “Christopher” he could’ve been the Christ, but his personality was so disordered it was too far of a reach to make me believe in that.  The guys “Christopher” worked in Information Assurance, but offered no assurance as to my safety, security, or health.  The more I tried to believe in them, the worse my life became, since they were not religious figures.  They never offered religious guidance in my life and never even answered a single prayer, but to keep me employed back when I needed it.  One day, I met this football player who fell from the sky in such awesome color, radiating a feeling of love I’d never known; I wondered who he was, and later found it was Jr. Seau, a deceased Linebacker for the San Diego Chargers.  Using a cryptogram, he showed me how his name was Jesus (by moving some letters and adding an S).  I believed for a long time, but stopped because it was unfathomable.  I ate at his restaurant when I was in the military and was considering leaving my boyfriend.  I often prayed to God for guidance and direction on the subject and he put a situation in my life at Jr.’s restaurant to help me make the decision to leave a bad boyfriend.  So, naturally, I believed in this man, and these men, but only to my detriment.  I saw a vision of him on the TV catching a football, long after his death.  So, is there an afterlife?  Yes, but it’s not what I expected or hoped for as they just appear to do the same as they did before with some changes.

They have yet to provide a level of safety and security that I’ve prayed my whole life for.  In fact, I’ve encountered nothing but murderers, drug addicts, and abusive partners since then, so I can only deduce these are the characters of the false religion I was warned about.

So, I still believe in God, I just don’t know what his purpose is, where he’s at, or why he’s left me to ponder and experience all of these things.  My journey is certainly not over, as I have a long life to live and much more to experience.  I do not follow Buddah’s religion and belief that life is full of suffering, yet I do believe there was a period of suffering and persecution for being a Christian and a believer and I’ve already endured that period.  I didn’t exactly get my head chopped off for being a believer or an adulteress, but was pretty damn close.  I believe he does speak to me, he does guide me, and he is not a dictator tyrant that forces me to follow only his way.  He gives me choices and helps me course correct when I make the wrong move.  I just can’t stand the “religious” fellowship, the way its pushed around, and the arguments as to who is right and who is wrong.  Honestly, I can’t follow it because I can’t worship a God that everyone else worships because it becomes a race for me to win and I tend to get a bit territorial, envious, and jealous.

I can’t say outright with 150% assurity that he is who I think or hope he is, but I know he’s special, he knows I’m special, and he’s amazing, even if he can’t use his body to keep me warm at night, and he can’t give me the things a young woman longs for like sex, money, a wedding ring, and a family to enjoy dinner with every night, although he’s tried.